There are many things to consider when designing mobile apps. However, one of the most important decisions to make even before embarking on app development is the kind of mobile application one would like to create. While there are many kinds of mobile applications such as games, communication tools, budget planners, among others, apps are broadly classified into three groups. These include native, web and hybrid apps. All of these applications may perform similar functions but are quite different in development. Whether you are creating an app for your business or have a great idea that can solve a problem, it is wise to know the differences between the various categories of mobile apps. Let’s have a look at what makes these apps different from each other.

Native mobile applications are those that run directly from the user’s device. Typically, users can access them as icons and menus from the home screen. Native apps are designed exclusively for a specific platform. For instance, there are apps that run exclusively on Apple’s iOS devices, while others support Android or Windows phones only. To use a native app, users have to download them from respective app stores. These include app marketplaces such as the Apple app store, Google Play store, and so forth.

Native apps can make use of a device’s full features such as the camera, GPS, accelerometer, compass, and so on. This is because such apps are written for a specific hardware platform. The good thing about native applications is that they can work offline. 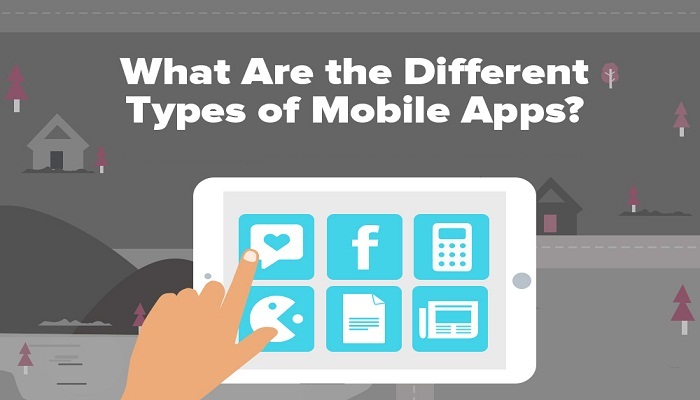 Web apps are not real applications per say, but are actually websites designed to look and feel like mobile apps. These applications run directly from the web browser of a mobile phone or tablet. In design, web-based apps run from the cloud or a remote server. Hence, users do not need to download them. Instead, ‘installation’ involves creating a bookmark on the home screen that opens the web address of the app from the phone’s browser. Since internet-based apps are not installed on a handheld device, they are not limited to the operating system in use. However, these apps require a constant internet connection in order to load.

Hybrid apps make use of both web and native phone features. In design, these apps are native mobile applications built using web programming tools such as JavaScript, CSS, and HTML5. Hybrid mobile applications are great for developers who want apps that provide some level of connectivity through internet services while at the same time make use of the phone’s inherent functions.

It is important for companies and individuals that want to create apps to know about the different categories of mobile applications. Native, web, and hybrid apps are not the same in development. They also have different pros and cons. What works for a particular audience might not be ideal for another user base. When working with your app development team, get to ask questions as to what best suits your needs.