The last few years has seen a marked increase in the use of social media such as Facebook, Twitter, Google+ and even Pinterest for marketing purposes. Considering the sheer number of users that gravitate to these pages, it really isn’t surprising that marketers are seeking to ‘cash in’.

But is social media really the goose that laid the golden egg? How does it compare against the good o’ email marketing that internet marketers have relied on for years on end?

Looking at the Plain Numbers

No doubt about it, social media is the flavor of the month and no question it has tons and tons of users. That being said, it doesn’t hold a candle to the number of users who have email.

It is easy to get caught up in the hype surrounding the figures bandied about by social media marketing advocates, but the fact is that even all the Facebook and Twitter users combined would only make up a third of the number of people that use email.

Not to mention that despite how extensively people use social media, they still use email to communicate a lot more. The only exception to this would be certain demographics of millennial who rely on Facebook and Twitter more than email.Comparing Conversion Rates

While it is true that sheer quantity may not translate into actually conversion rates, that isn’t the case with email. Because email marketing is highly targeted and allows marketers to build up more personal relationships, it often wins when it comes to conversion rates. 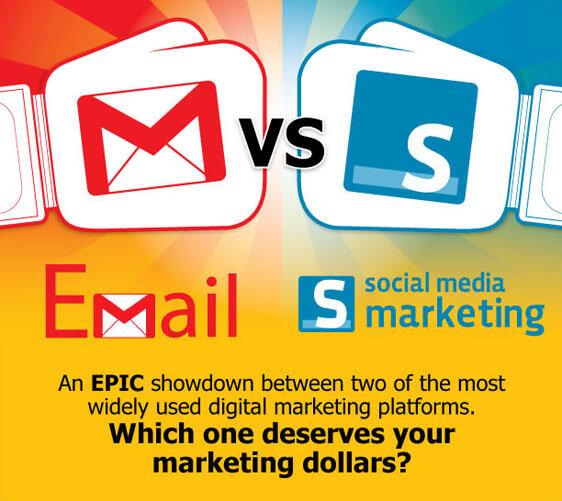 Furthermore, most people already expect to get offers for products or services in their email and research has shown that they are generally more open to offers via email than social media.

“So… Does Social Media Have Any Advantages?”

Although email marketing may blow social media out of the water in most areas, there are two reasons why social media is still worth considering:

In other words, although it loses the direct sales contest – there is still a place for social media in a good marketing strategy. The key is that it needs to be used to reach a broad audience, provide information and possibly generate interest instead of being used to try to fuel sales directly.

The Verdict – Why Not Use Both?

Think about it: Considering you now know that email marketing and social media don’t necessarily need to be used for the same purpose – why not use both? Without directly overlapping, the two can actually be part of the same marketing strategy.

Of course if you don’t have the resources to pursue both avenues, then the choice should be clear cut: Email marketing is better for direct sales but social media is great for building up a brand name.

Depending on which purpose is more important to you, it shouldn’t be too difficult to choose between email and social media.