The sea is the origin of life, and to be honest, it is beautiful, in every way; from the shallow waters where we have small fish to the depths, where strange bioluminescent animals make their living. However, the sea is also terrifying! In fact, it is one of the greatest sources of terrors that we can imagine, since it encompasses a bit of everything: darkness, the unknown, deformed and unpleasant creatures … not forgetting the predators, of course.

Today we will talk about Subnautica, which was officially released a few weeks ago, and it is about survival under the ocean. Subnautica tells the story of a survivor of the Aurora spacecraft, which crashed on an alien planet apparently depopulated with humans, but plagued with plant and animal life. Likewise, not everything is exploration and beautiful landscapes, because survival prevails… and against the clock.

The raft is a survival game at sea, which places you on a plank of wood that floats adrift. It is from here that you must take action and gather the materials that the current carries to your surroundings, using them to gradually expand the terrain and the comforts that this small improvised raft offers you. The sea in itself is dangerous for a castaway, but the one we see in Raft is even more so, since there is a shark prowling that will go after you head-on when it notices that you put only one foot in the water. Better to always stay dry and safe!

Your house is your castle, and this, both Raft and Subnautica take it to the letter, since it does not matter if it is day or night, you will feel a deep fear when venturing out of your comfort zone, your only security being the protection of your home. Whether it’s Raft’s raft or a Subnautica tech base … the feeling is the same. Obviously, these bases can be improved in various ways, thus allowing players to adapt them to their tastes and needs of the moment, be it food, water, protection, or various mechanisms depending on the game in question. While Raft is in Early Access on Steam (where it succeeded as Subnautica ), it started as a free, Indie prototype. 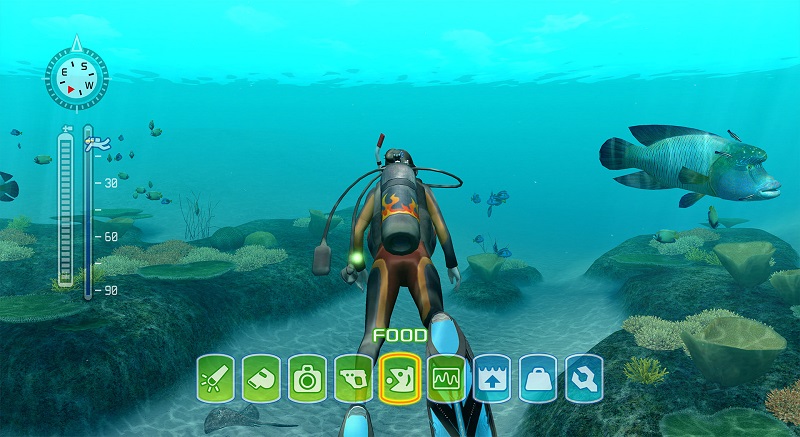 Finding a job that perfectly matches your passion in life is not easy, but if yours is scuba diving on a tropical island, you are in luck, Endless Ocean is your game! In this adventure under the sea we play a diver whose objective is to help a researcher to fill an aquarium with the species of fish that roam the territory, which will not be easy, since many are difficult to spot, and once seen, they will not make capturing anything easy. This takes the protagonist to great depths and unexpected corners to achieve his mission.

Both Endless Ocean and Subnautica take us deep into the ocean, where often strange and unknown creatures await us. That is why they also show us the two faces of the sea, which can be incredibly beautiful due to the variety of colors and forms of life that are found inside. If you enjoy discovering new creatures, you’ll especially have fun with Endless Ocean, which shows you both the known and the unknown from a new and calmer point of view than – the sometimes frantic – Subnautica. 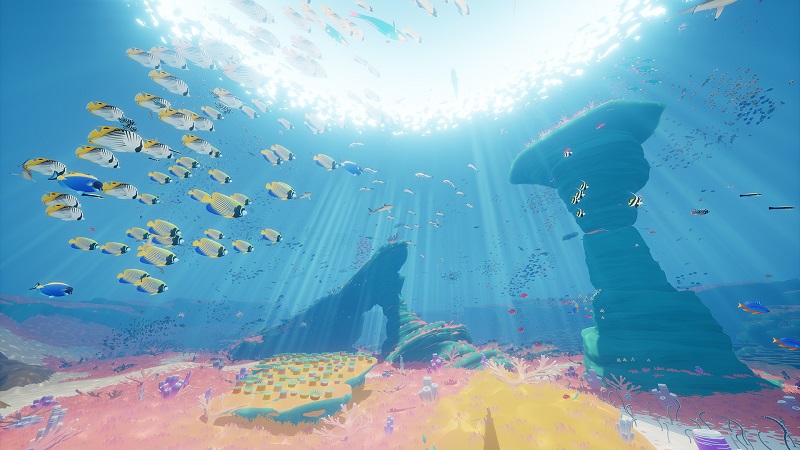 There are few diving simulators as complete and beautiful as Abzû, a game that puts us in the shoes of a diver and sends us to explore a large number of beautiful and even abstract underwater environments, full of fascinating creatures that inhabit these mysterious areas. The game features particularly colorful graphics that will delight players while allowing them to unleash their dreams of being a professional diver from the safety of their home.

Both Subnautica and Abzû put us in a strange and magical world in which we must move swimming from biome to biome, observing or avoiding the creatures that inhabit these territories. We also have the technology to help us while traveling! Another similarity is that at various times we will find creatures or structures that seem supernatural, which will make us astonish at their appearance and movements.

Sometimes our greatest enemy is in our heads, and a good account of it gives Debris, a game in which we must survive the underwater journey in an ancient, dark cavern full of strange and creepy fish, with the only company of a machine and the shadows of our mind. The protagonists are trapped during an expedition in search of a material called Debris, which will precisely be the only thing capable of providing them with air during this long journey through ice and darkness. But not everything is what it seems, since if something is true it is that darkness and loneliness are capable of affecting the mind, especially if you are surrounded by strange fish.

Debris explores the fear of the dark and, above all, play with sounds, much like Subnautica. This causes you to see yourself with your heart in a fist waiting for something to pop out of nowhere and devour you, each time your field of vision is reduced more than necessary. Shortness of breath is also a major cause of stress in both games, despite each having a way of catching it up quickly. In the long run, both end up being both a fascinating and terrifying adventure. 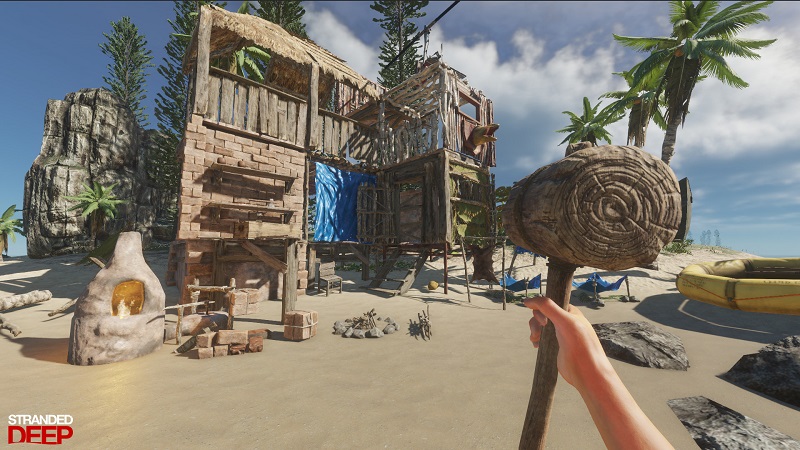 Stranded Deep puts us in the shoes of a shipwrecked trapped on an island and, of course, you must survive through thick and thin with the materials you find. As players will soon discover, this is quite tricky as you have to figure out how to find these materials, food, and water within a small island or in the surrounding sea. The objective is to develop enough and accumulate resources to be able to launch yourself into the sea and reach other islands or, hopefully, even civilization.

Both games deal with the concept of being trapped in a strange place, surrounded by water, and with only your tools and your wits to survive, improve, and eventually return home. Collecting materials from your environment to build equipment or improvements, in general, is what is imposed … of course, all this while both try to remind you of the fear of the sea by placing various predators inside that you can hunt or avoid, depending on how prepared you are. 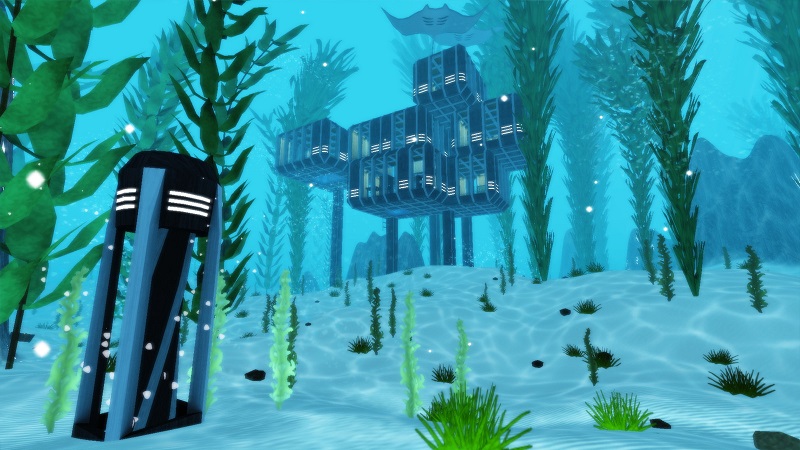 The main goal of FarSky is to gather the pieces of your submarine and ascend, although that does not mean that you cannot have a little fun while doing it. In this game, you can build a large number of structures and tools that will help you hunt, arm yourself, and eventually return home. But be careful, you must never forget that no matter how much fun it is to create your base at the bottom of the sea – especially in FarSky, which gives you a lot of freedom to do it – this is still an underwater game, so you will always be surrounded by the lack of oxygen and a large number of predators.

Of all the members on this list, FarSky may be the most similar to Subnautica because they coincide in almost everything at the gameplay level: a person trapped in the sea who must survive by building a base and hunting for food while investigating the environment and gather materials to build a vehicle that will allow you to escape from that underwater nightmare. Perhaps Subnautica’s surroundings are a bit bleaker because of the lore, but both tell a story of loss and overcoming under the sea.